Python is dynamically typed and garbage-collected. It supports multiple  programming paradigms, including structured (particularly, procedural),  object-oriented, and functional programming. Python is often described  as a “batteries included” language due to its comprehensive standard

Python was conceived in the late 1980s as a successor to the ABC  language. Python 2.0, released in 2000, introduced features like list  comprehensions and a garbage collection system with reference  counting.

Python 3.0, released in 2008, was a major revision of the language that  is not completely backward-compatible, and much Python 2 code does not run unmodified on Python 3.

The Python 2 language was officially discontinued in 2020 (first planned  for 2015), and “Python 2.7.18 is the last Python 2.7 release and  therefore the last Python 2 release.” No more security patches or other  improvements will be released for it. With Python 2’s end-of-life, only  Python 3.5.xand later are supported.

Python interpreters are available for many operating systems. A global community of programmers develops and maintains CPython, a free  and open-source reference implementation. A non-profit organization,  the Python Software Foundation, manages and directs resources for  Python and CPython development.

going to return the value 2. If I type round(1.5), then Python is going to  return me the value 2. As can be seen the color of the word “round”  turns purple which indicates that it is a built in function of Python.  However, to exploit the full computational power of Python we should  be using the “math” module which provides a bunch of other different  mathematical operations/functions as well.

A module is basically a collection of different functions. To import  Python’s math module type “import math” and press Enter.

the “ceil” function of the “math” module. To do that all we have to do  is type math.ceil(2.1) and it is going to return me the value 3. Similarly if  I want to retrieve the next lowest integer, i.e. if I do round(1.5) and  instead of getting 2, I want Python to return the value 1 then all I need  to do is use the “floor” function of the math module i.e. type in  math.floor(1.5) and it will return us the value 1. 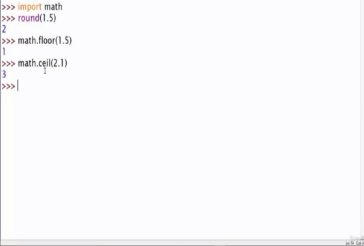 Along with having useful functions like “ceil” and “floor” Python also  provides us the values for some important mathematical numbers such  as ‘pi’ and ‘e’ (euler’s number). All we have to do is type math.pi and  math.e in order to get their values. This can save us a lot of time while  doing numerical computations.

Before proceeding any further we should know how the curve of sine  (‘sin’ in short) and cosine (‘cos’ in short) function looks like as in the  next part we shall be dealing with the sine and cosine functions.

There is another trigonometric function called ‘tangent’ (tan in short)  which is nothing but (tan(x) = sin(x)/cos(x)). As can be seen the sine  curve increases from 0 to 1 as the values along the x axis go from 0 to  pi/2 radian, then decreases back to 0 as x values go from pi/2 to pi. It  continues further down to -1 as the x axis values approach 3pi/2 and  then the cycle repeats again. Similar is the story of the cosine function  as well, instead it starts from 1 goes down to 0 and then -1 and again  climbs back up to 1. However, do keep in mind that the ‘pi’ that we are  discussing here is not the mathematical ‘pi’ value that we saw earlier.  This one is the ‘pi’ value in radians. A value of ‘pi’ in radians signifies an  angle of 180 degrees. So pi/2 will be 90 degrees, 3pi/2 will be 270  degrees and so on. Any time you see ‘pi’ being used in trigonometric  functions like sine, cosine, tan etc. always remember that ‘pi’ here will  mean 180 degrees and not 3.14 like we saw earlier.

returning the values of ‘asin’ and ‘acos’ Python will not return the  values to us in degrees or radians, so it will use ‘pi’ = 3.14 in order to  compute those values and return something like 1.57 for pi/2 instead of  returning 90 degrees. There is another function called ‘hypot’ which  returns the hypotenuse of a right angled triangle. It will be more clear  from the figure below.

That brings to the end of almost all the basic mathematical operations  that we can perform in Python. You can use this pdf as a reference for a  quick lookup if you ever forget any of the Python syntaxes or what  some of those mathematical concepts meant.

One thing that you will be able to take away from this lecture is that  Python is very capable of doing mathematical processes and there  are plenty of functions available for that kind of thing. If you want  more in depth stuff you might want to check out the NumPy and  SciPy libraries for more advanced functionality that is best suited for  data analysis.

Your email is safe with us.

We're not around right now. But you can send us an email and we'll get back to you, asap.